The New Year in III Corps

“The real objective of the war is the people. If the enemy could take Saigon, or the heavily populated areas of the Delta, or both, the war would be over—without negotiation or conference.” So Gen. Westmoreland in his Report on the War In Vietnam described the situation in 1967. “At the beginning of the year the enemy still enjoyed relative security in the huge War Zones in the III Corps, and our use of roads was generally restricted to Saigon and the immediate vicinity. Even our vital water links on the shipping channels…connecting the Saigon area with the sea were never totally secure.”

In the outskirts of the capital, government control had deteriorated to the point that even “large VC units moved with little chance of detection.” In an effort to remedy the situation, Operation FAIRFAX, kicked off in late 1966, would pair U.S. and ARVN units operating side-by-side in clearing operations—a first in the war. Eventually, so Westmoreland hoped, the South Vietnamese would completely take over security of the capital region. The operation, in reality mostly a series of small unit actions, was conducted in the densely populated areas around Saigon, where the usual lavish expenditure of American firepower had to be constrained. ARDF results “were not acted upon immediately, but rather were utilized to plan operations on a day-to-day basis." While FAIRFAX did improve security somewhat, it continued to promote “the tendency of the South Vietnamese to let the Americans take charge,” a problem for which the U.S. would never quite find an answer.

In the larger scheme of things, with the build-up of U.S forces now largely complete (over 400,000 personnel were in country at the beginning of the year) COMUSMACV could now cast his eye north of Saigon where lurked an even more sinister threat, the large enemy base areas known as War Zones C and D. “With the exception of Operation ATTLEBORO in late 1966,” noted Westmoreland, “we had not yet entered these enemy areas on large-scale offensive operations, so that many of them were still largely untouched.” That was about to change.

ATTLEBORO had in fact probed the enemy’s back yard and did considerable damage—the reported body count exceeded 1,100—but the 9th VC Division and the local guerilla units displayed their usual recuperative powers. Originally, COMUSMACV intended to strike directly into War Zone C in early 1967 but Maj. Gen. Joseph A. McCrystall, his chief of intelligence, convinced Westmoreland to first concentrate on the “Iron Triangle”, the enemy enclave only 25 miles northwest of Saigon which contained the Headquarters of VC Military Region 4, its base camps and supply caches. (See map below.) 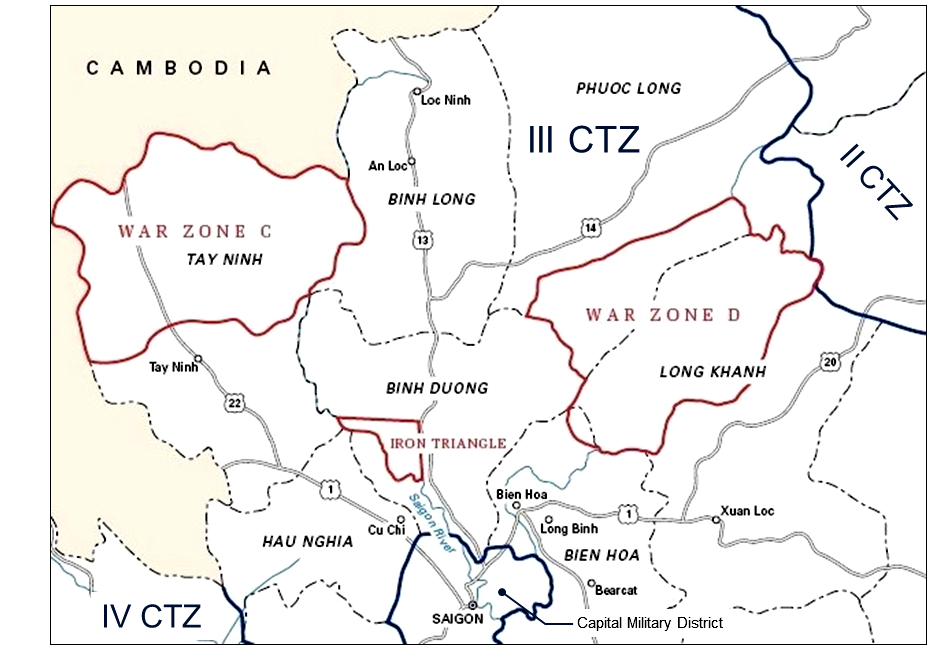 This intermediate operation, named CEDAR FALLS, was MACV’s first corps-level operation and the first to be based on “pattern analysis,” an intelligence technique perfected during the preceding months. The data base included “every instance of enemy activity contained in intelligence files” going back even to the French days. ARDF, along with photo recon and other technical means, provided much data, all of which was analyzed along with records of enemy contacts, agent reports, and other sources—up to 35 topics might be considered.

Locational data relating to each intelligence topic were plotted on transparent overlays, as many as five of which might then be stacked on a map. The resulting pattern of dots frequently gave unmistakable graphical indication of enemy capabilities and intentions. Bolstered by this intensive intelligence support, CEDAR FALLS kicked off on 8 January.1

Ben Suc and the Tunnels

The center point of CEDAR FALLS was the village of Ben Suc, a longtime VC stronghold. When the operation kicked off on 8 January, the first objective was the surprise clearance and eventual destruction of Ben Suc. The village would be surrounded and the entire population screened for communist sympathizers. Those who remained would be moved, with livestock and possessions, to a new location as the old village was razed. Beneath Ben Suc, “hidden from view, was another village, one of underground chambers for storing supplies, maintaining records, providing medical treatment, and manufacturing uniforms, mines, and booby traps." This subterranean labyrinth proved to be one of the most extensive tunnel complexes discovered in the entire war. Within it, American "tunnel rats" found a priceless trove of enemy documents—492,553 pages worth, to be exact—among which were plans and objectives for the enemy's 1966-1967 campaign and over 1,500 pages of “signal intelligence and crypto material,” including “signal directives, signed operation instructions. and crypto operator notebooks.” In short, CEDAR FALLS produced a windfall characterized as “the "biggest intelligence breakthrough in the war."

Enemy reaction to this unprecedented American strike was surprisingly restrained, and action remained relatively light. Even so, over 700 insurgent dead were claimed against “only” 73 U.S. KIA, with another 337 wounded. More significantly, “all major headquarters installations” of MR 4 had been destroyed. Over 600 weapons had been captured, “along with large quantities of ammunition, mines, and booby traps” to go along with over 3,700 tons of rice. The depopulated areas became free fire zones; engineers cleared nine square kilometers of anything that might provide cover to the enemy.

In addition to “pattern analysis” input in planning the operation, ARDF "guided the friendly forces directly to the enemy and continued locating his camps and staging areas throughout the operations.” Over the 16 days of CEDAR FALLS, EC-47 crews fixed 574 targets, of which 362 were of “immediate interest” to ground forces. Even at the stately pace of the Electric Goon the Iron Triangle was perhaps 15 minutes flying time from Tan Son Nhut, so it seems likely that this effort was the exclusive product of the 360th TEWS and the 6994th “headquarters” unit. While it must be recognized that ARDF was only part of the pattern analysis technique, it is nonetheless interesting to note that of the 177 suspected enemy facilities identified within the 11th Armored Cavalry’s operational area, 158 of these (89%) were found to be within 500 meters of the reported location, with an average distance of 200 meters.

With the Iron Triangle now a veritable no-man’s land, COMUSMACV turned again to his original objective: War Zone C. (See map.) JUNCTION CITY would be yet another attempt to root out COSVN and its subordinate main force and guerilla units. The difference this time would be the overwhelming force which II FFV could bring to bear on a weakened enemy. In preparation for this biggest-ever assault, two diversionary operations were planned. In the westernmost parts of War Zone C, the 25th Infantry Division would launch Operation GADSDEN against the 271st NVA Regiment while to the east the Big Red One would target the 272d NVA, the idea being to drive these units further into the enemy’s base area where they would be crushed by the upcoming main offensive. As with every allied operation, COMPASS DART provided Close Tactical Support for GADSDEN. Between 2 and 20 February, 480 fixes were passed to the DSU, of which 295 provoked some sort of immediate response. In what amounted to a two-week side show in War Zone D by elements of the 173d Airborne Brigade and the newly arrived 9th Infantry Division, 335 targets were fixed in support of Operation BIG SPRING.

In simplified form, JUNCTION CITY called for the rapid airborne deployment of a horseshoe-shaped cordon around the northern edge of War Zone C, hugging the Cambodian border. Stretched across the open (southern) end of the horseshoe would be the assault force, whose mission would be to smash COSVN and its supporting elements against the “anvil” of the horseshoe. In all, 22 U.S. battalions would be involved; far and away the largest ground effort of the war to date. Overall control of the northern and eastern quadrants of the horseshoe was delegated to the 1st Infantry Division, with other units under operational control (OPCON) of the division. The 25th Infantry Division would command the other half of the horsehoe, bounded on the west by Highway 22 (see map), as well as the assault force waiting to the south.

In the last moments of darkness on 22 February, multiple ARC LIGHT strikes, some of them no doubt based on ARDF fixes, blasted suspected COSVN locations, heralding the opening of JUNCTION CITY. In the hours that followed, the “horseshoe” was nailed in place mostly as planned. On the eastern edge of the cordon, 2d Battalion, 503d Infantry (Airborne), along with an artillery battalion, made the largest combat parachute drop since the Korean War. Neither the paratroopers nor the heliborne battalions encountered much opposition as they dug into their blocking positions. On D-day+1 the “hammer” assault force, the 11th ACR and 2d Brigade of the 25th ID, swung northward.

For five days 35,000 American troops, augmented by South Vietnamese Marines, tromped through central War Zone C in what was shaping up as “the largest non-battle of the war.” COSVN headquarters had evaporated—if in fact it had been there in the first place. But on 28 February JUNCTION CITY’s first real battle ensued as the enemy recovered from his initial shock and began to hit the American supply lines east of the horseshoe. The 1st Division’s sector continued to heat up; ambushes became more numerous and firefights increased in intensity as the 272d VC Regiment joined the fight. Meanwhile, “recent electronic signal intercepts”, elsewhere confirmed as ARDF, indicated that COSVN’s military intelligence bureau was still operating nearby. On 4 March twenty-one B-52s hit the suspected area—"an unprecedented ARC LIGHT concentration against a single target.” The next four or five weeks were punctuated by attacks, some of them hotly contested at very close quarters, against American landing zones and fire bases east of the original JUNCTION CITY area of operations. In every case the enemy, mostly elements of the 272d and 273d VC Regiments, was beaten back by TACAIR and artillery, taking severe losses in the process. To the west, much evidence of COSVN’s presence was uncovered but the 271st VC Regiment eluded its pursuers. By mid-March most of the American forces in the 25th Infantry’s sector had withdrawn to their permanent base camps. As enemy resistance gradually petered out, JUNCTION CITY was terminated on 15 April.2

Specific ARDF results in support of JUNCTION CITY were scarce, but during the final phase of the operation 1,558 fixes were passed to ground units, 903 of which were of immediate value to the supported commands. (The total included those fixes turned in by ASA’s 146th Aviation Company, also based at Tan Son Nhut.) MACV Intelligence chief McChristian stated that he was “very satisfied” with the overall SIGINT effort and credited “timely ARDF” with preventing one VC assault on a fire support base. Other commanders voiced similar opinions.

JUNCTION CITY was the closest thing to a knock-out punch that the combined American air and ground forces in South Vietnam were capable of throwing. It was not enough. True, the VC 9th Division had been severely bashed; MACV claimed a body count of over 2,700 enemy while losing 282 of its own. And, like CEDAR FALLS, the operation had destroyed or captured tons of vital war materiel and gleaned much of intelligence value. But battle continued to be joined at the time and place of the enemy’s choosing, and so long as his Cambodian and Laotian sanctuaries remained off limits the struggle would continue as a bloody war of attrition until one side or the other decided the reward was not worth the sacrifice.
_________

1 Click here for a previously posted "special edition" filler on CEDAR FALLS.
2 An "addendum" to JUNCTION CITY went on until 15 May but for practical purposes the operation ended on 15 April.

Sources for quotations and other material will be added as time permits.