Independence Day, 1967, marked the second anniversary, give or take a couple of weeks, of the first allied ground offensive of the war; a foray into War Zone D by the 173d Airborne Brigade and 1 Battalion, Royal Australian Rifles. Up to that point, the ROLLING THUNDER bombing campaign was seen as the “big stick” most likely to convince the North Vietnamese to cease and desist. Hamstrung from the beginning, ROLLING THUNDER had proved to be inefficient and therefore ineffective. The periodic bombing halts, intended to convince North Vietnam (as well as domestic and world opinion) of the genuine U.S. desire for a diplomatic solution, in fact did little more than provide a respite for the enemy to rest and reload. For the U.S., it boiled down to an unpleasant dilemma: Get out, leaving the South Vietnamese to their fate, or engage and defeat the enemy where he stood. When it came down to it, abandoning even a questionable ally was not a viable option in either the White House or the Pentagon. In the two years since the introduction of American ground forces, COMUSMACV had continued to make requests—ultimately granted, after much debate—for increases in troop strength. Operational details were somewhat hazy, but Westmoreland did have a master plan. Phase I, the 1965 deployments as South Vietnam appeared to be on the verge of collapse, was an emergency measure to “stop losing the war.” Phase II, the U.S. buildup in 1966, would start winning it. If the Phase II offensive failed to convince the enemy he couldn't win, Phase III, continuing a year or year and a half after Phase II, would clear the base areas and mop up the remaining enemy units before returning a free and democratic South Vietnam to its grateful citizens. At least that was the vision.

Phase I, it seemed, had worked. For the moment South Vietnam was saved, although its future remained cloudy at best. The Phase II offensive got underway as planned, but there was a catch. COMUSMACV ruefully admitted that the projected NVA infiltration rate would double his own rate of increase. His revised Phase II estimate called for well in excess of 350,000 American troops in 1966; by mid-1967 the total might approach 400,000. (MACV’s monthly “Review of Events” news media handout for March, 1967, listed the actual total as 435,000; subsequent editions stopped reporting the number.) COMUSMACV was in an unenviable spot, metaphorically described by Gen. Dave R. Palmer in his critique of the Vietnam War: “Denied the capability of chopping at the roots of aggression, General Westmoreland was compelled to attempt killing the tree by plucking leaves faster than new ones could sprout.” Nonetheless, maintained Westmoreland, if he got enough manpower a “crossover point” would eventually be reached when the enemy invaders would be killed faster than they could be replaced.

Where Would it All End? 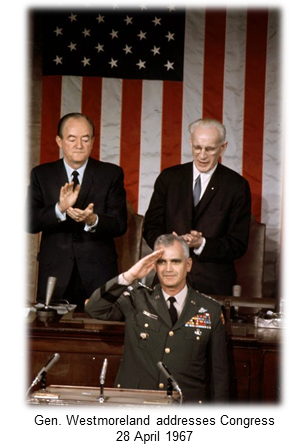 On the home front, a rising tide of doubts about the war threatened to become a flood. Never quite sure why the United States was in Vietnam, “the American public grew increasingly confused and impatient…. If all was going so well, why were draft calls so high and more and more American troops sent to that faraway little country? If all was not going well, why didn’t the United States unleash all its military might on the aggressors?” In April, 1967, General Westmoreland was "invited" to return Stateside to undertake what amounted to an unprecedented sales campaign by a field commander to drum up support for his—and by implication the president’s—conduct of a war. Without another infusion of troops, Westmoreland warned, “we will not be in danger of being defeated, but it will be nip and tuck to oppose the reinforcements the enemy is capable of providing.” “In the final analysis,” he conceded, “we are fighting a war of attrition in Southeast Asia.”

In a face-to-face meeting, LJB listened to Westmoreland’s rationale, then asked a pointed question: “When we add divisions, can't the enemy add divisions? If so, where does it all end?” Give him another two-plus divisions, replied the general, and he’d win it, but it might take three more years, possibly longer. That increase, if granted, would push the total of U.S. troops in Vietnam to 565,000. Upping the ante by another hundred thousand might slice a year off the timetable. The crossover point—and any chance of victory—remained as elusive as ever.

That was an answer Lyndon Johnson could not live with—he would be facing an election in little more than a year. And now even his most trusted advisor, the man who had once proudly owned up to his leading role in “McNamara’s War,” also harbored doubts about the effectiveness of the U.S. effort and the sacrifices it entailed. As far back as late 1965, the SecDef had cautioned LBJ: “We should be aware that [increased] deployments of the kind I have recommended will not guarantee success. U.S. killed-in-action can be expected to reach 1000 a month and the odds are even that we will be faced in early 1967 with a ‘no-decision’ at an even higher level.” That prognostication, of course, was not made public. The troop increases continued, and casualties rose in proportion. San Francisco's “summer of love” did not reflect the mood in other parts of the country. Draft cards were burned, and university “teach ins” fueled anti-war sentiment as demonstrations grew in size and became increasingly violent. In more ways than one, mid-1967 in fact portended a crossover point in the war.

Whatever the TEWS and the back enders of the 6994th and its detachments knew about developments back in "The World" came mostly via the radio and TV broadcasts of the Armed Forces Vietnam Network (AFVN) or the Pacific edition of the Defense Department’s Stars and Stripes newspaper, which dated from WWII. Otherwise it was business as usual, and business was good. For the first six months of 1967, COMPASS DART crews flew 5,251 ARDF sorties, of which 2,924 were in close tactical support of allied operations. (The remaining 2,327 were “continuity and development” missions.) Results totaled 24,431 fixes and cuts; 7,692 fixes were linked to specific VC/NVA units, 3,488 of which were MACV priority targets. To improve target identification rates, initially unidentified ARDF fixes were later matched against wideband ground intercept recordings under project MUSTARD. Positive correlations were then passed on in the ACC’s daily ARDF fix reports. In late June, the MACV target priority system was revised to increase emphasis on targets “that had been found to have a tactical mission”—presumably meaning VC/NVA combat units which might pose an immediate threat, as opposed to other target types which were then deemphasized. Priority fix rates increased accordingly.

In other operational developments, attention was given to procedural issues, maintenance, radio channel allocations, and other possible ramifications arising from the forthcoming installation of the KY-8 secure voice system in COMPASS DART aircraft. One proposal would’ve replaced some airborne analyst slots with additional Morse operator spaces, the rationale being that, with secure air/ground communication possible, any assistance or direction the on-board analysts could provide could instead be obtained by simply talking with operations. Considering KY-8 range limitations and the undisputed success of DRILL PRESS and it’s AMS/analyst system, the proposal was scratched.

Dropping psychological warfare leaflets continued as a mission cover. In January-March, the 360th TEWS alone dispersed 32,824,000 of the chits; the 362nd chucked out another 17 million. The TEWS also began to emphasize visual reconnaissance. The Pleiku-based 362nd was particularly active, spotting both barges or sampans and trucks, all of which were subjected to air strikes resulting in damage or destruction. In addition, COMPASS DART occasionally fixed targets on the open seas which were then reported to the Navy’s MARKET TIME patrol for action. Some believed TIDE 86 might have been working one of these targets before being shot down.

Battles Along the Potomac

Early July found General Westmoreland unexpectedly back in the U.S, this time for his mother’s funeral. His April troop request had provoked yet another round of debate within the defense establishment and elsewhere in Washington. The bottom of the manpower barrel was already being scraped, and the call-up of reserves had long since been nixed as being politically unacceptable to the White House. Furthermore, the number crunchers in SecDef's Systems Analysis group concluded that more troops did not translate into a directly proportional increase in enemy dead: 100,000 more U.S. soldiers would cost the VC/NVA only 70 additional casualties per week—hardly a decisive crossover point. The Joint Chiefs, and others within DoD, disagreed. Finally, McNamara offered two stark choices: (A) Give COMUSMACV what he wanted, reserves and all, thus further escalating the war and inviting even more internal dissention, or (B) cap the troop ceiling, recognizing that outright military victory by either side was now impossible, and renew pacification efforts in South Vietnam while working more earnestly towards a diplomatic solution.

As was his wont, LBJ dithered. After much wailing and gnashing of teeth, on 14 July McNamara authorized a revised deployment plan calling for 525,000 troops, scheduled to be reached in 1969. A month earlier, Robert Strange McNamara had made his most significant contribution to the Vietnam War. Plagued by his own doubts and the inability to solve the one great problem that would define his life’s work, he ordered the formation of a task force to compile a record of “how we had gotten in such a hell of a mess.” The outcome, 18 months later, was some 3,000 typewritten pages of narrative, collated in 43 volumes and backed by another 4,000 pages of supporting documents. Bearing the non-standard classification markings of TOP SECRET-Sensitive, in 1971 this collection would spark another battle in the Vietnam War when the New York Times published the leaked manuscript as The Pentagon Papers.
_____

Click here for sources upon which this article is based.