We make no claim for the completeness or accuracy of the contents herein, nor can we advise as to an individual veteran's entitlement to the ribbons accompanying these unit awards or how to obtain such information.

Both the TEWS (front end) and 6994th Security Squadron (back end) units received multiple awards and citations during their service in Southeast Asia. The 6994th and its detachments laid claim to being the most decorated unit in USAFSS history. The tables below were extracted from Air Force Pamphlet AFP 36-2801, vol. 2 (corrected as of 30 Jan 1989) superseding AFP 900-2, which listed most of the Vietnam War awards. We'll update if/when better info comes to hand.

How to interpret the tables:

1. The numbers in parentheses indicate the campaigns in which the unit participated. (See chart above.) In the case of the 6994th, the original campaign streamers are in the custody of the 94th Intellignce Squadron, Ft. Meade, Maryland. However, the Herritage Chapter (San Angelo, TX) of the Freedom Through Vigilance Association (FTVA) purchased exact replicas to be used at squadron reunions or other functions.

3. Inclusive dates for which the award was made. 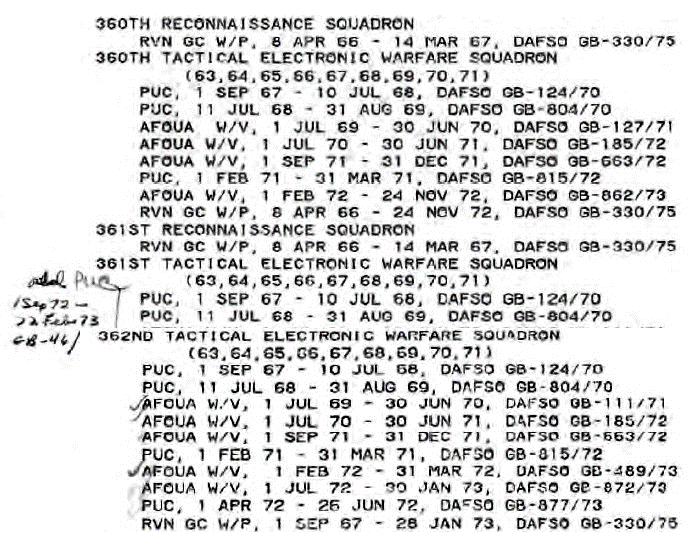 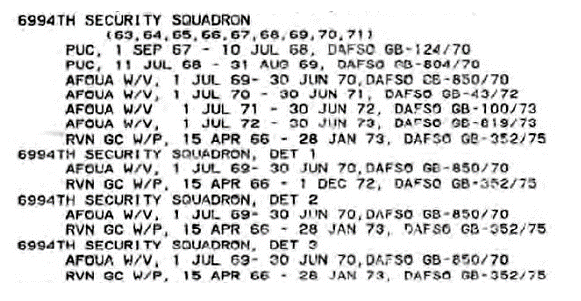 Click HERE for the orders we currently possess relating to the 6994th Security Squadron. There may be discrepancies between the listing above and the orders themselves. Again, we'll update/correct if additional info comes to light. Former 6994th personnel may want to check "Special Unit Awards and Decorations" on the 6994th website.