At roughly the same time as the 3d RRU’s Vietnam Flight Detachment began operations, a USAF project called HILO HATTIE also appeared on the scene. The aircraft, to outward appearances a standard four-engine C-54 transport, was one of many platforms modified for special operations under the Air Force’s BIG SAFARI program. Originally configured to fly clandestine reconnaissance missions in Europe, HILO HATTIE carried huge cameras concealed behind pneumatically actuated, quick operating, 24 X 48 inch panels in the exterior skin. In the closed position, these panels fit so tightly that they were unnoticeable even to people walking past the parked aircraft.

According to USAFSS legend, no less a personage than cigar-chomping USAF Chief of Staff General Curtiss E. LeMay was behind the Air Force’s development of ARDF. (LeMay was a “ham” radio operator.) Whatever the background may have been, somewhere around August, 1962, the air force took sole possession of a joint USAF/USN project named MONA HI which was under development by Sanders Associates of Nashua, New Hampshire. As a test bed for the new system, renamed HAWKEYE, the Air Force selected a well-traveled C-47, serial number
45-0925, assigned to the 1st Air Commando Group at Eglin AFB, Florida. Nine-two-five had been delivered to the Army Air Force in the last weeks of WWII. For the next seventeen years she served in a variety of utility roles, at one point being configured as a VIP transport.

The whereabouts of the HAWKEYE aircraft for first nine months of 1963 cannot be determined with certainty, but circumstantial evidence indicates that 925 initially returned to Eglin for further testing and evaluation of the prototype ARDF system under simulated operational conditions. Other evidence points to a subsequent deployment to Korea, where the camera installation again caused problems.  In any case, by 7 October 1963 the aircraft was back at WRAMA for more work. Three days later, the work completed, the aircraft made the short hop down to the USAF Special Warfare Center at Eglin.  At some point shortly thereafter, HAWKEYE departed for Asia.

ASA, meanwhile, augmented its modest ARDF fleet with the addition of a pair of U-8 Seminole aircraft. The U-8 (formerly L-23) was a twin-engine Beech Queen Air equipped with the AN/ARD-15 system. The U-8 offered a considerable improvement in performance over the U-6 Beaver and would in time become the mainstay of the Army’s ARDF effort in Vietnam. Until mid-1963, no systematic tally had been kept of ARVN operations based on ARDF. Over the next twelve-month period, though, the South Vietnamese would launch at least 15 operations based on intelligence from the 3d RRU’s flight detachment. 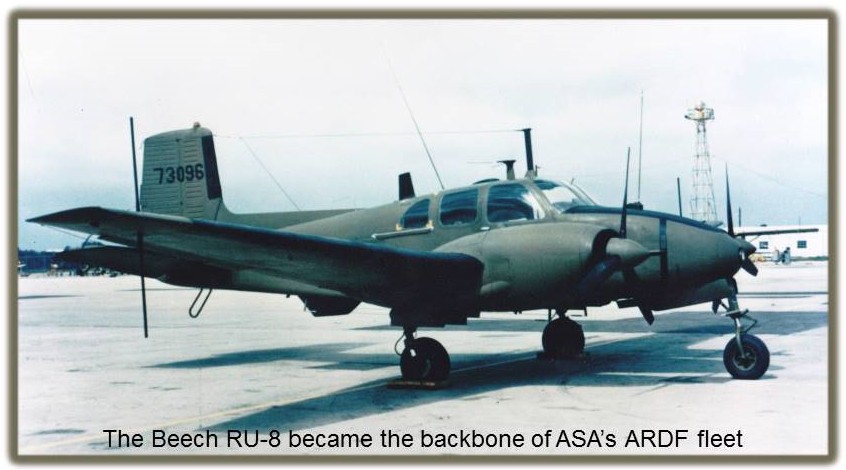 Results varied. In late May, a joint USAF/VNAF air strike blasted a major communist complex in the central highlands. The South Vietnamese announced a major success; U.S. pilots were less certain. A friendly village was bombed in the process, killing 14 civilians. Better luck came in late July when an ARDF fix enabled a surprise ARVN attack in IV Corps which claimed ninety VC killed for less than ten friendly casualties.

In the summer of 1963 the spotlight shifted from the war and focused on the deteriorating political situation within South Vietnam. The United States, which had brought Ngo Dinh Diem to power as the best hope of stopping communism in Southeast Asia, now found itself backing a regime which clearly did not have the support of the people of South Vietnam. In July, a special CIA estimate noted that “if—as is probable—the regime is dilatory, inept, and insincere” in handling the worsening crisis, the chances of a coup “will be better than even.”

The chances were in fact much greater than even, and the CIA knew it. But if Diem went, who would take his place? And would change necessarily mean improvement? The debate went right up to the White House level, but nobody had the answers. In Saigon, dissident generals hinted that action against Diem might be taken at any time. On 28 August, the Saigon CIA station chief cabled Washington that the situation had “reached the point of no return” but more than a month went by before the on-again, off-again coup actually took place. Whatever the degree of U.S. involvement, the murders of Diem and his brother Ngo Diem Nhu in the early morning hours of 2 November 1963 were not in the plans. American leadership too was destined to change; barely three weeks later John F. Kennedy would also fall victim to an assassin’s bullet.