Less than a month after his inauguration, President John F. Kennedy held a conference with his top military advisors. A principal topic of discussion was type of warfare then becoming known as counterinsurgency, the chief protagonist of which was the president himself. When asked about training needs for the South Vietnamese, Army Chief of Staff General George Decker noted that

One of our most valuable contributions is radio direction-finding equipment in order that guerrillas can be located. Usually, guerrilla teams have some sort of radio communication, and we can locate them promptly if we have teams trained with this direction finding equipment. This is vital to counter-guerilla operations because guerrillas are in small groups and move so rapidly.

Radio Direction Finding, usually shortened to RDF or DF, is one of the oldest tricks in the Signals Intelligence trade, dating to the days before the First World War. The diagram below, copied from an Army technical manual, illustrates the basic technique. 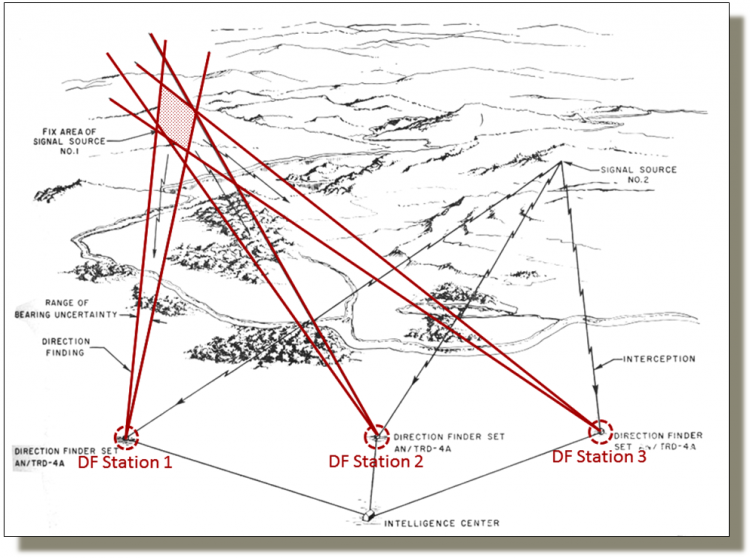 Three or more direction finding stations simultaneously tune to the frequency of a target transmitter. When the target is heard, each station “shoots” a line of bearing (LOB) indicating the direction from which the signal is coming. The LOBs are then plotted on a map. The target transmitter is then “fixed” in the area where the LOBs intersect. If only two LOBs can be obtained, the less precise location is known as a “cut”.

The SIGINT Problem in Vietnam

USAF Brigadier General Edward Lansdale, a figure of near mythological proportions in the history of covert actions in Southeast Asia, suggested that the U.S. “expand the current program of interception and direction finding covering Vietnamese Communists activities in South Vietnam, as well as North Vietnam targets.”

These operations, Lansdale thought, should be conducted “on a fully joint basis, permitting the sharing of results of interception, direction finding, traffic analysis and cryptographic analysis [performed by] American agencies to be shared with the Vietnamese to the extent necessary to launch rapid attacks on Vietnamese Communist communications and command installations.” A program, “duly coordinated” by the Army Security Agency (ASA), would be set up to train Vietnamese army units in radio intercept and direction finding. At a 29 April 1961 meeting of the National Security Council, JFK approved Lansdale’s recommendations essentially as written.

ASA was neither prepared nor properly equipped to respond to a request for immediate tactical support in a place few Americans had yet heard of. Nonetheless, two operational plans were quickly prepared. The first of these, under the project name SABRETOOTH, would establish a minimally classified communications intelligence (COMINT) training program for Republic of Vietnam Army (ARVN) personnel. The other program, WHITEBIRCH, called for a medium-range direction finding (MRDF) net manned by ASA operators. The Americans would locate an enemy transmitter, then tip off ARVN combat units to go after the target. At least that was the vision.

After much scrambling for personnel and equipment, the 400th USASA Operations Unit (Provisional) was organized at Clark Air Force Base in the Philippines. To disguise its ASA affiliation, the outfit was redesignated as the 3d Radio Research Unit. On 13 May 1961, 92 troops of the 3d RRU arrived in Saigon. Although advisors in country now numbered well over a thousand, this was the first unit deployment to the Republic of Vietnam. The troops were issued U.S. passports and ordered to dress in civilian clothes.

Within two days of arrival, the 3d RRU intercept positions were up and running and by month end, site surveys for the WHITEBIRCH net were complete. A partly declassified NSA history offers a stark appraisal of this early MRDF effort: “The WHITEBIRCH net was a failure. It had the lowest fix rate in the Pacific, and it was constantly short of manpower.”

This dismal state of affairs was attributable in large part to the peculiar signal characteristics caused by jungle vegetation and high humidity, coupled with the technical limitations of the elderly AN/TRD-4 equipment in use at the sites.  In an effort to remedy the situation, the 3d RRU turned to the equally aged but more portable AN/PRD-1 short-range direction finding (SRDF) sets previously supplied to the South Vietnamese.

Even with non-essential accoutrements cast aside, the PRD-1 was a fairly hefty piece of equipment. The set could be vehicle mounted or transported to a temporary ground site. To overcome the previously mentioned technical difficulties, the device had to be set up within relatively close proximity to the enemy transmitter.

Among the ASA operators advising the Vietnamese was twenty-five-year-old James T. Davis of Livingston, Tennessee. On 22 December 1961 the PRD-1 team he advised was returning to Saigon when their vehicle was hit by what, in future wars, would be termed an improvised explosive device. The ¾ ton truck veered off the road in a hail of Viet Cong lead. Davis attempted to return fire but was shot dead, along with all but one of the 10 ARVN soldiers in the group. 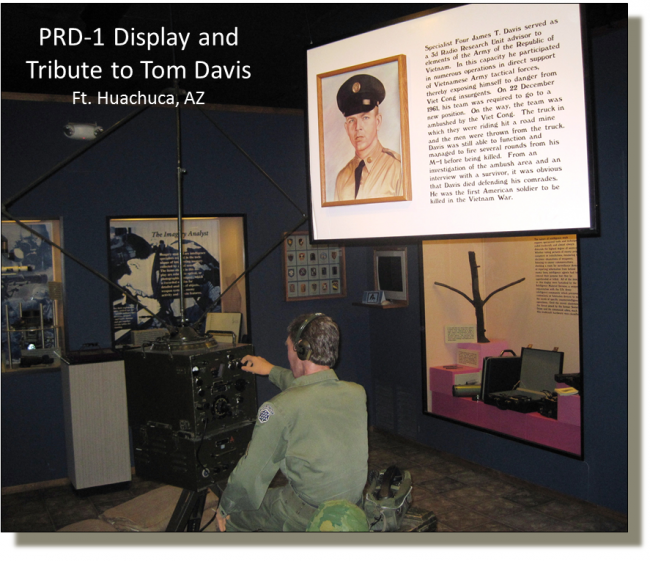 Tom Davis’s was the first American battle death in Vietnam—previous casualties among advisory personnel had resulted from bombings or other terrorist type actions. The 3d RRU’s compound at Saigon’s Tan Son Nhut airbase was named Davis Station in his honor. Davis Station would be the nexus of ASA’s presence in Vietnam for the duration of what would prove to be a very long war.

Nineteen sixty-two brought a noticeable increase in U.S. involvement in a growing war. Two U.S. Army transport helicopter companies had just arrived in country, to be followed shortly by  the Air Force’s Project FARM GATE, a collection of piston-engine aircraft, many of WWII vintage, ostensibly to provide training to the fledgling Republic of Vietnam Air Force (VNAF) in what was still thought of as a counterinsurgency war. In January, the USAF began what would become one of the most controversial missions of the war; Operation RANCH HAND, the aerial spraying of the powerful herbicide known as Agent Orange.

In February, U.S. military activity in Vietnam was placed under a newly created entity, Military Assistance Command, Vietnam. At least in theory, MACV was a joint command, subordinate to the Commander-in-Chief, Pacific (CINCPAC) in Hawaii. In practice, MACV was Army-dominated from the start and, as time went on, orders frequently came directly from Washington, with CINCPAC often little more than another message addressee. Inter-service turf battles, a sometimes thorny relationship with the American ambassador (the nominal head of the “country team") and micro-management from Washington would plague MACV and the American effort in Vietnam until the end.