First a little background: As noted in the December newsletter (No. 012) John V. "Doc" Garrett, PhD, is on the cusp of retirement as the 17th Training Wing historian at Goodfellow. During his tour there Doc has been a good friend and great supporter of the EC-47 community. While thinking of a suitable means of recognizing Doc's good work and to salute his impending departure, visions of times past floated into Tom Nurre's head. Why not, thought Tom, have Doc display his short timer's status in the traditional USAF manner by sporting the ribbon from a bottle of Segram's VO?  Well, VO's a little harder to come by now than it was in those days, but that's another story. Meanwhile, Tom sent out an APB asking for recollections of this ritual. Here's some of what we got, slightly edited in a few cases.

Tom Helwick: I was in the 362nd TEWS from Dec '69 to Dec '70 in both Pleiku and DaNang as a pilot. The Pictures are from Da Nang at a hooch party thrown by Ron Sergot who's on the left. The other fellow is the brother of fellow pilot Dave Volin who was in the army at the time. The other picture is of Lt. Col. Bloomberg, whose first name I can't recall, who is receiving his VO Ribbon during our little get together.

[Editor's note: Looks like the colonel's name might actually be Bloomfield. We stuck a shot of a VO bottle and box in the middle.]

Trolling social media yielded more comments, a lot of them from ex-USAFSS troops who were stationed all over the world  "back in the day."

Brian K: At Goose Bay [Labrador] in the mid-60s we teamed up the ribbon from VO with a whistle found in Cracker Jack as our Short Timer symbol :-)

John P: I did - Tan Son Nhut. The Major frowned upon her [?] troops wearing it, but I worked night shift.

Jones D: You’re so much older than I am, so guess I didn’t have that opportunity. But we did have a short patch.

Peter C: I damn sure did! I was scheduled to return to the ZI from Da Nang on July 23, 1967; so, I dutifully donned the ribbon on June 24 [my 21st birthday] and proudly wore it. On July 15/16 we were attacked with devastating results. Bomb dump blew; new Ops Building (not yet occupied) was flattened; both runways and flightline severely damaged. I was thus 'involuntarily extended until the chaos could be contained. As I remember, after the dust settled, I threw that ribbon as far over the perimeter fence as I was physically able. (Thanks, Brother Tom Nurre for providing an opportunity for a "war story”!)

Earl F: For some reason I thought it was only those of us becoming short timers leaving VN. I wore mine proudly at the 16th USAF Clinic, Nha Trang.

Lawrence M: I had one of the "Short Timer" ribbons at Trabzon, Turkey in 1967. For a calendar I drew a picture of a girl in a bikini divided into sections. Each day I colored in a section. When the bikini was colored in, time for me to leave. Guess is was easier to color in a section each day rather than erase.

Walt R: Proudly wore one when departing from Misawa [Japan] in 1969 and again when I left DaNang Vietnam in 1970. Only time I drank VO was to get the ribbon. Was a fad for quite some time. Don't remember doing it when I left Misawa in 1976. Had a short time calendar in Vietnam but never at Misawa or Osan. Was in Korea '86-'88 and don't recall the ribbon during that time frame. 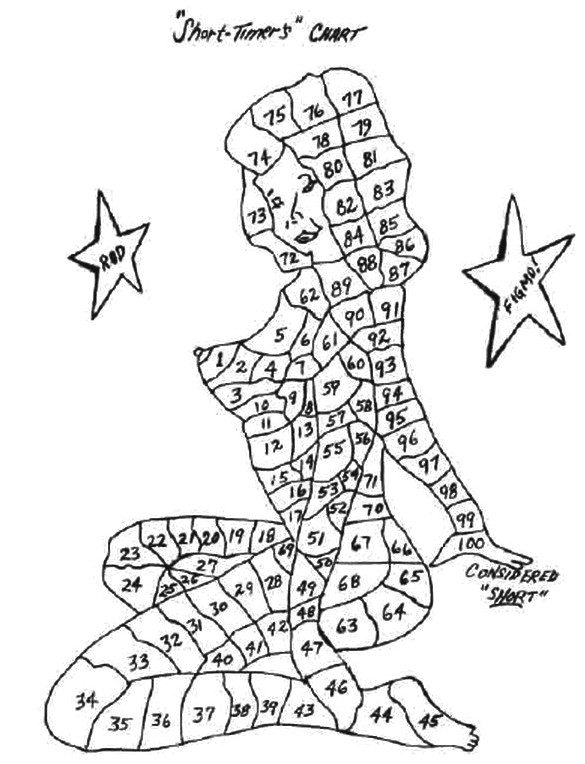 Peter D: It was a tradition at Camp Pieri [Germany] in 1963 when I left there. BTW, I have been looking for some of the guys who were at Camp Pieri from 1960 to 1963, but I never see their names on these posts.

Stanley S: You have chafed one of my sore spots. When I got to the 6927th at Onna Point Okinawa, it was standard to wear the "short ribbon" on the headsets. But then when Lt SBC took over and when he was aided by TSgt EF, the short ribbons were declared "unauthorized item on your uniform" and all were forbidden to wear them. I chuck that into the category of "How to win friends and influence people". Not! There were some equally asinine rules issued in about that same time frame.

Jim H: Wore one at Misawa. No time at Darmstadt [Germany] as I was gone after early out announcement was made. We used to say we had so many days and a wake-up.

Bill B: I never saw them while in USAFSS, but the guys in Det. 6, 1099th SpecActySq HQ on Tan Son Nhut had a FIGMO calendar. It was a picture of a lovely lass divided up into 365 numbered sections. I am sure you all can guess where “1” was located!

Jay E: Seems to me that you were supposed to kill the fifth in one night. Does that sound right? I know in my case it took more than one night. It took me several nights, but I still wore the ribbon proudly.

Jim D: Being a good Irishman, I polished off the bottle the afternoon and night before I left Da Nang along with another old Mick. Didn't sober up till we landed in California.

Jim K: VO ribbon and PCS [orders ?] with "FIGMO" in Magic Marker scrawled across it hung on your barracks room door or bunk.

Ron T: I had a VO short-timer's ribbon for Clark in the P.I. in '70 but in '72 I was so in love with Crete that I didn't make one for the 6931st at Iraklion Air Station. And that was for discharge, and not just change of station.

Mike B: I wore the short-timer’s ribbon at SLK Taiwan in '66 from my headset.

Robert T: I wore one at Johnston Island back in 1968. I’m sure I drank the whole bottle because that was all we did on our off time.

Chuck M: I wore one in Scotland in 63 - didn't drink any VO, probably because of my 20th birthday in 60 where I had 10 shots of cognac before heading into Edinburgh on a double decker bus. Arriving in Edinburgh I immediately tumbled down the stairs into the street and was placed in a taxi by 3 buddies and sent back to RAF Kirknewton [Scotland] where I nursed a massive hangover for my 4-day break. Ever since, I'm a beer man except for the annual toast on New Year’s Eve.

Bill W: I was stationed with the 6989th SS at Misawa AB, Japan from 1961-62. When we rotated back to the ZI we wore the FIGMO ribbons after we received our orders (Forget It Got My Orders) if you will. I guess later they were changed to Short Timer ribbons. July 3, 2019.

George H: As I was clearing out of the 6994th at TSN in January 1967 and proudly wearing my FIGMO ribbon on my fatigues, a two-stripe COP gate guard stopped me and told me that I had to remove the "unauthorized" ribbon. When I refused, he called a 1Lt COP who said that I'd either remove it on the spot or accompany him, and he guaranteed I would eventually remove it or regret it! Well, to say I was pissed is an understatement! I went to the 6994th ops building and told my story to CMSgt George Geno. He said, "give me that ribbon" and asked where the two-stripe COP was standing guard. He put the ribbon on his uniform and stormed out the door. Needless to say, there were two COPs that had a change of heart about wearing the "unauthorized" FIGMO ribbon. (Content slightly edited for clarity...Admin) July 10, 2019

Now, for you civilians who may not be familiar with the term, FIGMO stands for "Forget It [well, sorta ...] — Got My Orders!" So there ya have it, folks. If you can add to the knowledge base, jump in below and share!