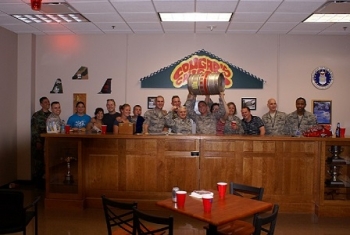 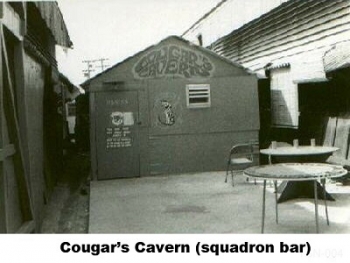 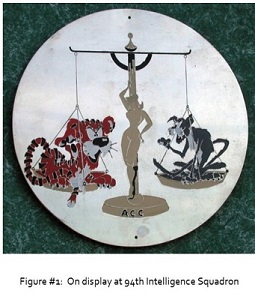 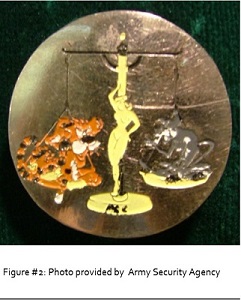 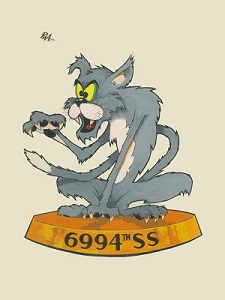 Personnel from both the frontend (360th TEWS) and backend (6994th SS) units designed and adopted a good number of unofficial patches and other memorabilia that caricatured the GOONEY BIRD aircraft and one or more of the operational names.  The ANTIQUE AIRLINES, OLD TIGER, HAWK EYE, BARON, and COMBAT COUGAR items were very popular. The STEEL TIGER and BARREL ROLL mission area names may have also inspired some artists and illustrators.

The 94th Intelligence Squadron at Fort Meade, Maryland, displays a number of these items in their unit heritage room, Cougar's Cavern.  (More than one of you reading this possibly quaffed a beverage or two in the original hangout at Tan Son Nhut.)  Currently, active duty personnel and retired unit veterans are renovating the heritage room and have asked for help in documenting real facts about certain displayed items, the Combat Cougar painting and Tiger/Cougar Scale engraved disk Figure #1, in particular.  (During our ARDF History Exhibit research, we received the engraved disk Figure #2 photo from our friends from the former Army Security Agency (ASA).  Note the particular resemblance between the cougar on the scale and the cougar in the painting. This gives credence to the suggestion that the tiger on the scale may actually represent the ASA 509th Radio Research Group “Tattered Tiger” rather than the “Old Tiger” of the 360th TEWS.)

Former 94th Intelligence Squadron operations superintendent, CMSgt (R) Bill Pace, sent us this request: “I'd just like to know if anyone recognizes these items and knows who made them, why, and where they were displayed.”

Please use the New Comment entry below and share what you know with Bill and the folks at the unit.  This New Comment capability is very similar to the Guestbook procedure.  If you have questions or would like to send additional photos of these or related Combat Cougar memorabilia, please use our [email protected] email and put COMBAT COUGAR in the subject line.

Due to SPAM, this Comments section is closed to discourage continuing abuse of this feature. Thanks for understanding.