Why Was Bravo Maintenance Called That?

The term obviously comes from the phonetic alphabet word for the letter "B". But what did "B" relate to? The answer, we're pretty sure, can be found in Air Force Materiel Command Instruction 21-126, Temporary 2 (T-2) Modification of Aerospace Vehicles: Group A—The items to be installed as part of a modification to support, secure, interconnect, or accommodate the Group B components. In general, anything that cannot be readily removed, provides support, or provisions for equipment installation is considered Group A.

In its day, the ARDF equipment aboard the Electric Goon, particularly the computer-assisted elements, represented state-of-the-art technology; “bleeding edge” stuff, as ex-Bravo tech Dave Abel jokingly remembers it. In many respects, the entire EC-47 program was outside mainstream USAFSS operations, and maintenance of the sophisticated, non-standard ARDF gear presented a challenge.

Dan Loomis recalls that “At the start of the ARDF program they used only 301X0’s [Aircraft Radio Repairman] to maintain all the special equipment on the ARDF aircraft. In doing so they were running out of 301X0’s and were taking them away from other Security Service sites.” As early as May, 1966, USAFSS recognized that more specialized ARDF maintenance training was necessary. The command estimated its annual requirements as 24-60 technicians with the first 24 to be trained during April-September 1967. 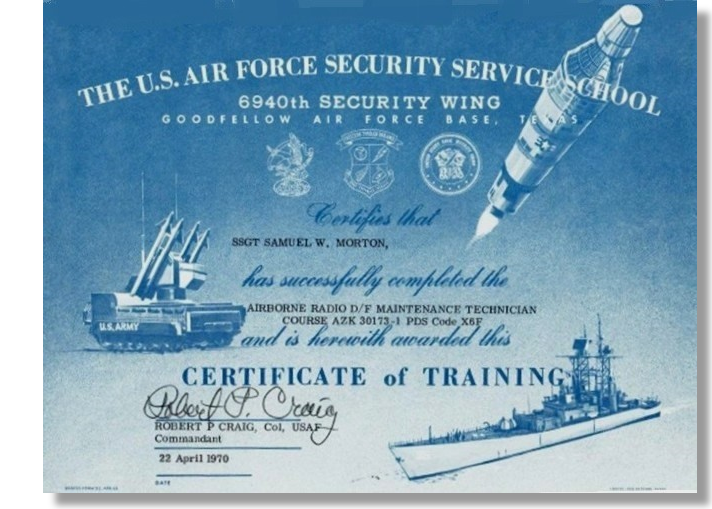 To meet this need, the USAFSS School at Goodfellow AFB, Texas, was tasked with developing and implementing a training program specifically designed around ARDF equipment maintenance requirements. Initially, the school staff planned for an “Airborne Electronic Intercepts Equipment Repairman” course, AZK 30173A, which would include 15 weeks of lecture/demonstration and 5 weeks of laboratory training. Subjects would include Solid State theory, receiver systems, panoramic receivers, direction finding systems, digital systems, and associated equipment.

This would be followed by a four-week course, AZK 30173A-1, “Airborne Intercept Maintenance Technician (AN/ARD-18)” devoted exclusively to the ARDF equipment. Once actually implemented, the course became AZK 30173-1, “Airborne Radio D/F Maintenance Technician.” In 1967 the two courses were combined into a single nine-week course although by 1969 this course had expanded, first to 12 then to 13 weeks, in order to incorporate training on the computer-assisted AN/ALR-35 system.

Originally, USAFSS anticipated sending 11 prospective instructors to the Sanders Associates (manufacturer of the ARDF gear) facility in Nashua, New Hampshire, for factory training. In the event, only two actually received the Sanders training. USAFSS then requested that Sanders send an engineer to the Goodfellow school to “train the trainers.” To complicate matters, an AN/ARD-18 set, as the ARDF equipment was originally designated, scheduled to arrive at Goodfellow in September, 1966, did not arrive until 22 December. Even then certain support equipment was missing. The Sanders engineer/instructor’s visit, scheduled for December, was postponed until January, 1967. Eventually these and many other kinks in the ARDF program were worked out. Hundreds of ARDF operators and an unknown number of “Bravo” maintenance techs eventually passed through Goodfellow on the way to Southeast Asia.

The Air Force’s wartime ARDF program was launched as a rather short notice, “plan as you go” endeavor. Despite priority status and various “encouragements”, components and spare parts were hard to come by and schedules slipped. As EC-47 aircraft began to arrive in Vietnam in 1966 and early 1967, Bravo Maintenance personnel were faced with a multitude of problems. Aborts, both air and ground, were frequent. Reliability gradually improved as operations in Vietnam began to smooth out and Sanders’ production issues were resolved. 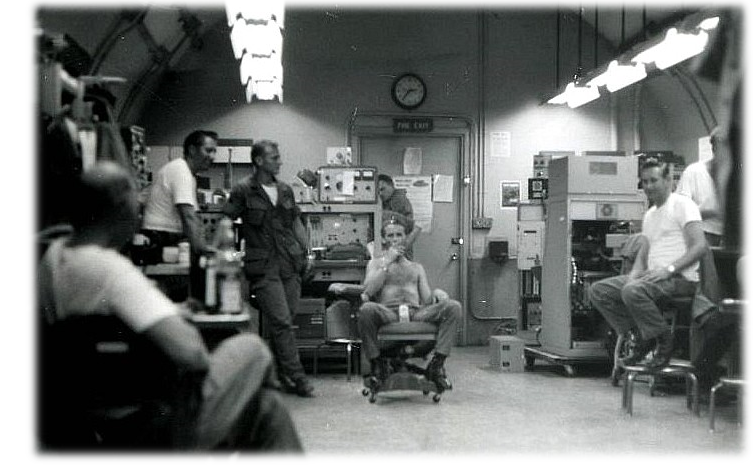 The number of people authorized for each base was based on the number of aircraft. Da Nang had 11 aircraft. We had two 12-hour shifts, noon to midnight, and midnight to noon, 6 days a week. My day off was Wednesday."

"All Bravo guys did not fly; only a small percentage of us had the survival training required to fly combat missions on a regular basis. We probably had 4 to 6 people on flight status. I would guess in a year the average missions flown [7 hours on EC-47Q models] was close to 50, and I have no idea of number of Functional Check Flights.”

Dave Abel recalls similar experiences: “The whole shop had a very heavy work load. A whole day off was a very rare event. I'm guessing at least 90% of our maintenance load was on the Q birds.” [EC-47Q with the VHF-capable ALR-38 system.] I really can't remember doing much work on the ALR-35's, as they were very reliable. Especially problematic were the antenna/preamps in the nose, and both wings. Remember, each HF antenna had a top and bottom dipole, with the signals merged by way of a coaxial combining unit near the antennas. As I remember it, all the Z, Y receivers, tape decks, etc., were fairly reliable, easy to repair, and really didn't require much attention.” At least at Da Nang in '71, we had very serious spare part issues. Lots of problems with the Nav/Converter (grey box in the X console) which took aircraft system signals, like the compass and Doppler inputs, and converted them to Digital. These Analog to Digital (A to D) converters were fairly new stuff back in the day.” 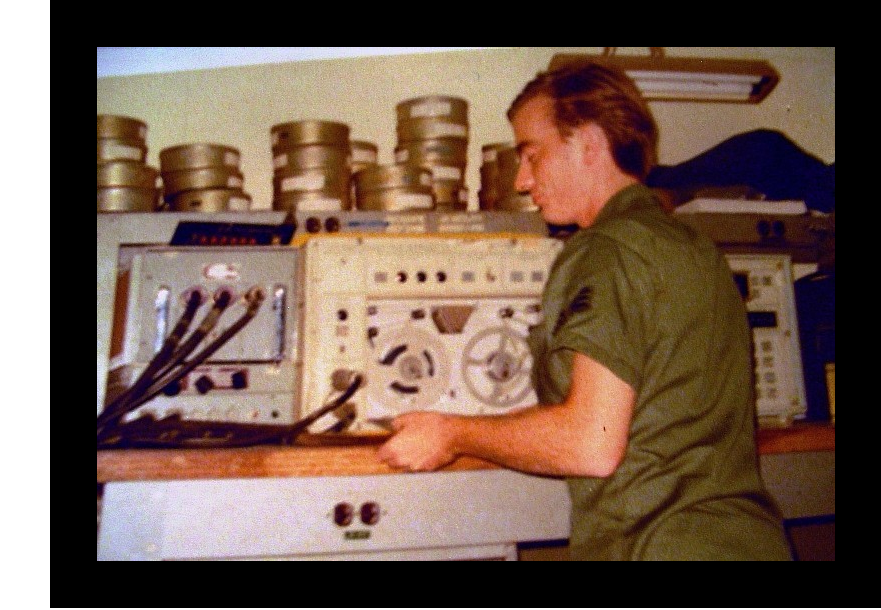 “I was a ‘Bravo’ SEFE (as was Dan) for a while, and I ended up with 50 missions.  A fair amount of these flights were personnel check rides and equipment check rides [FCF] near the base. We had two transmitter systems (HF and VHF) at the shop that we used to check out the repaired D/F systems.  My first 13 flights were all full-blown 7 hour missions flown at night. Very scary rides up in our part of the country! I'm thinking most guys ended up with around 40  to 50 flights.”

It was on one of these “very scary rides” that Bravo technician Dale Brandenburg, shown at work in the photo to the right, was killed in action in the shoot-down of Baron 52 on the night of 5 February 1973. Building 448, one of the 17th Wing training faciities at Goodfellow AFB, was renamed Brandenburg Hall in memory of SGT Brandenburg.

Thanks to former Bravo techs Dave Abel and Dan Loomis for their contributions. Photos of the Da Nang Bravo shop and Dale Brandenburg are from 6994th.com. (Click to view a larger image.) Training references are from the unit histories of the 6940th Security Wing, 19671970. In the future we hope to obtain more information on all aspects ARDF training at Goodfellow AFB.

The photo on the left below shows Dave Abel (L) and Dan Loomis (R) ready to go. Both served with Det. 2 at Da Nang, 197172. On the right, Dan leans against "the communication transmitters we used to fly ops checks, providing a signal of known location to D/FÍ¾ first pass on one side of the aircraft and second pass on the other side. I do not recall a bad fix after repair on any test. The test flights were normally flown after a repair. From suit-up to back to normal clothes about two hours, no more than an hour depending on other traffic at Da Nang."