Inside the EC-47: A General View

At a minimum, all production EC-47 aircraft were fitted with the “X” (ARDF) position, the “Y” position (intercept and air-ground communication) and the navigator's station. Some aircraft were later fitted with two additional intercept consoles, Z1 (forward) and Z2 (aft.) The X, Y, and Z positions were manned by enlisted operators from the 6994th Security Squadron. The Navigator was a TEWS officer. The diagram below, lifted from the "Dash one", shows the typical layout for an aircraft equipped with all four SIGINT positions. Aircraft interiors as well as exteriors changed over time; no two aircraft were identical, inside or out. 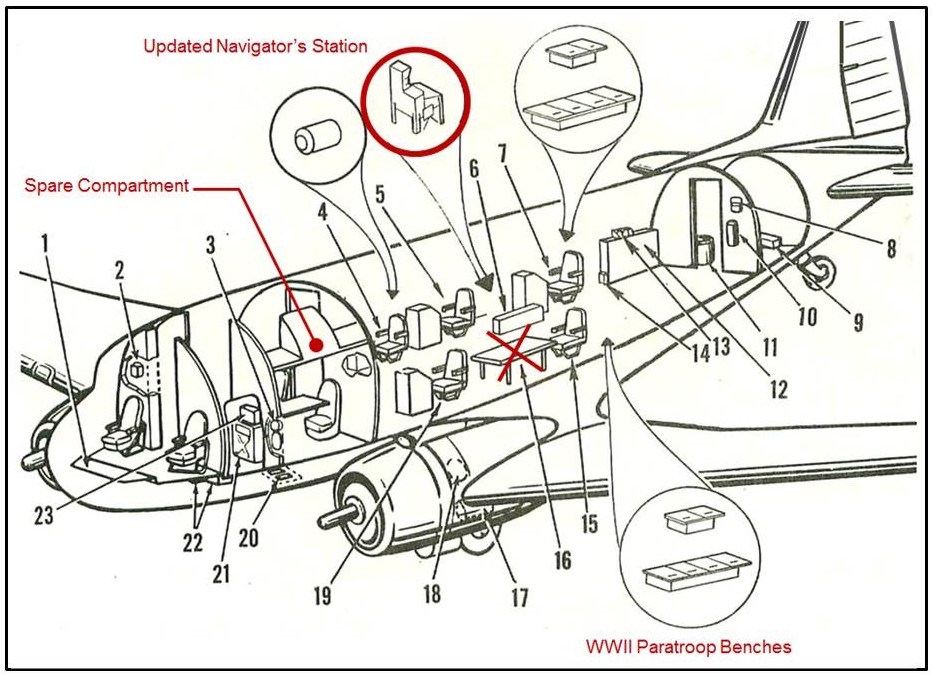 Not indicated in the diagram is the WWII-era navigator’s station in the compartment between numbers 3 and 4. The flight mechanic, if one was assigned, typically occupied this seat for takeoff and landing. Later, when flight mechanics were no longer carried (ca. late 1970), the compartment could be occupied by a third pilot or SIGINT analyst. Any other passengers—typically students undergoing on-the-job training—would take one of the WWII paratrooper bench seats along the rear fuselage walls.

If several students were aboard, the Electric Goon might carry as many as ten people, perhaps even one or two more on a very rare occasion. The minimum crew of a “straight bird” (X and Y only) was five: Pilot, co-pilot, navigator, X and Y operators. “Z” configured aircraft were not to be scheduled unless all the SIGINT positions were manned.*

The Electric Goon was based on a mid-1930s design, and in the original C-47 cargo configuration, the old bird was rather Spartan. For basic human necessities, there was a small urinal on the back side of the door (not shown) opening into the tail section. The electrical system inverters, likewise not shown in the diagram, were also housed in this space. Within this cozy alcove was an appliance fondly referred to as the “honey bucket.” (#11 in the diagram.) The honey bucket was nothing more than a metal cylinder with a toilet seat attached to the top rim. Snug within this outer shell was a metal bucket. Properly equipped, this inner bucket was lined with a plastic garbage bag. If not, and the honey bucket happened to be used, the post-flight chores became considerably more odious.

There was no built-in water storage aboard the Goon, but pre-flight SOP called for filling an insulated 10-gallon (or so) corrugated metal water can of the type often used by road crews. If available, ice was typically added. One of the minor EC-47 modifications was the installation of a "hot cup" just behind the left side of the cockpit bulkhead. This was essentially an electrically heated, heavy-duty coffee pot, although to maintain at least a modicum of cleanliness it was used only to heat water for instant coffee. In a minor adaptation, soup cans, or the small cans contained in the K-ration-like inflight meals, could be warmed up by immersing them in the heating water.

A first-aid kit was typically found on the rear bulkhead, at about spot #8 in the diagram. A fire extinguisher and portable oxygen tank/fire-fighting mask was usually mounted on or near the cargo door. Red-painted butt cans, simply tin cans with large padded hooks attached, were hung over the horizontal cable harnesses near each position. Given the environment of the time, they were well used.

Getting in and Out

The Electric Goon was normally entered and exited by way of removable metal steps which hooked into the floor sill of the left half of the cargo door combination. The larger (right hand) side door was held shut by a tightly winched nylon strap. Once the crew as aboard, the steps were removed and stowed inside the fuselage, typically in the tail cone. The left hand picture below shows the steps, both doors, and the placement of the miniaturized “stars and bars” national insignia.

There were a number of emergency exit windows and hatches, both in the fuselage and the cockpit. Parachutes were loaded in a bin opposite the door. (Noted as #12 in the diagram, and shown on the right below; the only photograph so far discovered that shows the entire bin.) In anything but relatively straight and level flight—an unlikely scenario in the event of a serious AAA or missile hit—making one's way to the bin, perhaps in darkness, fastening the chute on to the harness, then getting out the door, would've been a virtually impossible task. So far as is known, no attempt was ever made to bail out of a USAF EC-47.

Notice the "web" of straps attached to the open door frame. Inside that frame was a smaller door, without hinges, which could be removed. Due to the extremely high ramp temperatures at Tan Son Nhut, the 360th TEWS aircraft almost always flew with this “paratroop door” removed in the hopes of reducing the furnace-like temperatures in the fuselage by a few degrees.

The two short, backwards slanted antennas just about centered above and below the doorway are the self-test antennas used to pre-flight check the "X" ARDF system. Barely visible here, they are painted yellow.

Or why it’s dangerous to make absolute statements concerning the EC-47. Here we see 43-48480 with the tail code (AL) markings of the 361st TEWS flying with the paratroop door removed, although that was not the squadron's typical M.O. 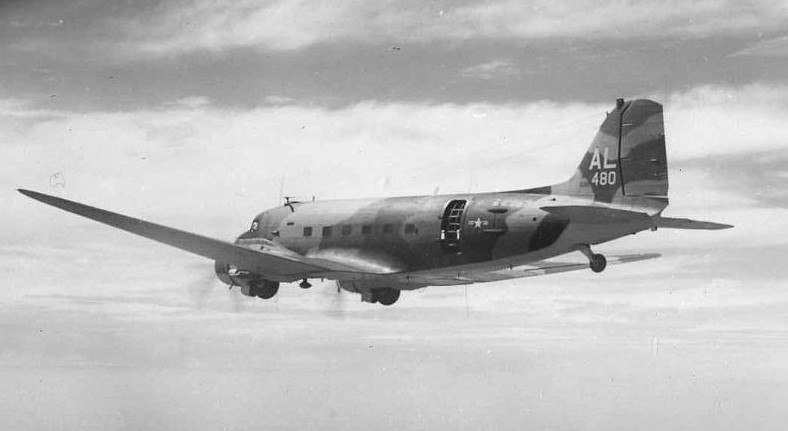 This aircraft may have been newly reassigned to the 360th, or it could have been flying out of TSN during a typhoon evacuation or for other reasons. Who knows? In any case, the open doorway and the safety "web" are clearly shown.