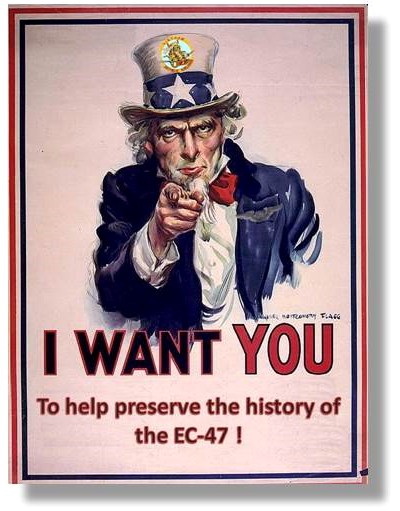 This website is dedicated to a great old airplane and the guys who flew and maintained her — and that means YOU ! We’re going to make available as much of the official documentation as it’s possible to obtain at this late date, but that’s only part of the story.

Many of you, front and back end types alike, sent photos to J.C. years ago. Some of these can still be seen on the legacy site. But some have been lost, and others are of very poor quality. So dig through those closets and boxes again — or maybe for the first time — scan those images in high resolution and send 'em in via the “Contact Us” feature at the top of the home page.

If you’re really ambitious and want to do a narrative to go with the pictures, we can handle that too. In fact we encourage it. Send a shot of yourself from “back in the day”, a brief sketch of your EC-47 experience (job, base, tour dates, etc.), along with any post-USAF info you’d like to include, and send it in. We’ll create your very own page — subject to your approval, of course — and post it here.

Robert M. Cameron, 360th TEWS, 1969-70. A navigator's tour on the Electric Goon. Reprinted from the Friends Journal of the AF Museum.

Gary McPherson, a supply type who found himself deployed with DRILL PRESS

J.C. Wheeler. An open letter to EC-47 Veterans—Send in those stories!

Curtis Mann, ex-Gooney Bird crew chief, tells about his adventures with a VIP transport at TSN.

Charlie Phippin, one of the "Dirty Dozen" back enders to open Det. 1 at Nha Trang, shares his experiences.

Terry Ward tells about his experiences as an analyst supporting Operation JUNCTION CITY.

Alan Brown remembers his tour as pilot in the 360th TEWS.

J.J. Pitzeruse's "Airborne Operations and Adventures" tells about some "non-mission" aspects of life in Southeast Asia.